We were up very early and drove about five hours through desolate wilderness to arrive at Machaerus, and the ruins of one of Herod Antipas’s twelve palaces.
It is significant because it was where John the Baptist was executed.

The challenge, at least for me, was that it was a very steep climb and, of course, it was 1 pm and at the very heat of the day. I did it in homage to John, and I am delighted to say that I made it!!!

We then did a short drive to Madaba where we had the best meal we’ve had since arriving in Jordan at Haret Jdoudna.

Later we went across the street to St George’s Church to see the extraordinary mosaic map of the known world created in the 6th century. The light was too dim for photos, so of your interest is piqued, google St.George’s, Madaba, and you can see it all!

Tomorrow we’re on the road again to Mt. Nebo and the Dead Sea before returning to Jerusalem and the College. 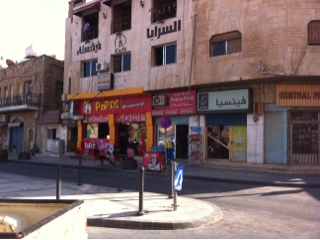