Coming to northern New Mexico for so many years, I have made good friends by happenstance. The path from one friend to another new friend to yet another is joyfilled mystery.

This trip I met Lenny Foster.

Some of our friends participate in an annual art show during Advent called Taos Folk. This year’s visit I was attracted by photography called Healing Hands. Turns out that the art was done by Lenny, and we were told we must go to his gallery a couple of blocks away.

As I walked through his gallery, I was attracted to the back room. Dimly lit, it felt like a sacred space. It was indeed.

Lining the walls were Lenny’s photographs of hands of people from all over the world. Old hands. Young hands. Hands holding hands. A rainbow of colors. Many were holding or touching some talisman of healing–like prayer beads, paint brushes, herbs, pottery, an apple. It was when I came to the black and white photograph of an older woman holding her Bible, that my heart caught. It was at that moment that I also met Lenny.

It was a holy moment of sharing faith and stories. The photograph that had touched my heart was of his mom’s hands. He and I talked about bringing his exhibit to Houston. We’ll see what God has in store.

And the name of Lenny’s gallery? Living Light. What better place to meet a new brother during Advent? 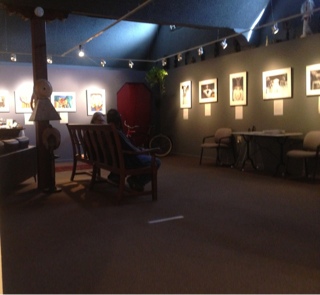