I’m waiting for the final flight of my Sabbatical travels. After a last breakfast with grandson Austin, and a final morning holding baby Jonas, I left snowy Redmond, Oregon, around noon for a flight to Portland. I then flew to Salt Lake City which is covered in snow, and my flight home is delayed an hour–I hope only an hour.

This plane ride will be leg #52 of my Sabbatical travels.

I’ve traveled on big jets and tiny propeller planes. I’ve flown first class and in a middle seat. I’ve ridden in a sherut, a small bus, a camel, and in the back of a pick up truck over no road at all in the desert. I’ve taken my last trip in my 2007 Prius and my first in my new 2012 Prius.
I’ve taken ferries and driven across the ocean floor at low tide to an island. I’ve spent a week only walking on an island with few cars. I’ve rented cars in two countries and three states.

This weekend I take a final road trip in Texas to visit family. Then a week from today, I’ll get in my new green Prius and drive the 3 1/2 miles to St. Mary’s for my first day at work since August.

But first I have to get out of SLC. 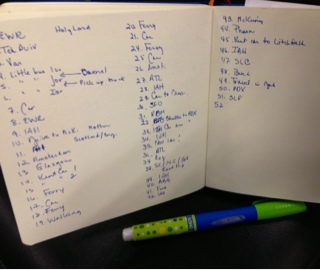 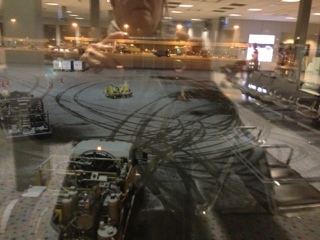