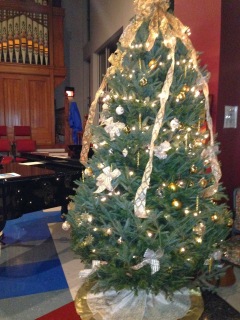 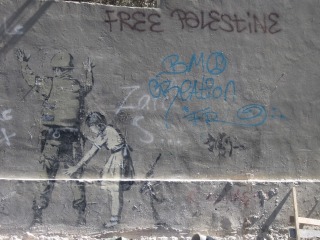 To get into Bethlehem, you have to find the place in the wall that has been constructed between Israel and Palestine.  To keep the terrorists out.  At the gate, there are soldiers with guns who check your passport before entering. After passing safely through the gate, my brother and I drove in circles for a while before arriving at Manger Square. We parked our car, and walked toward the Church of the Nativity.
It is a Basilica that was built in the fourth century over the place where Jesus was thought to have been born.  And rebuilt and rebuilt.  Earthquakes and marauding armies do happen. One would expect a very fancy entrance, large and ornate doors, into such an important church. But the door inside is pretty much a hole cut in the wall. It’s very small, so that one has to bow to get through the door that leads towards the manger. Or be a child, short enough to walk through. 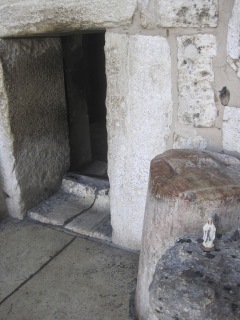 I bowed to get through the door, walked through the narthex and through yet another door and into the church itself. For the most part, the church is a very old, very empty space. A large hall with columns around the edges but no seats at all.
At the very end of the hall, in the apse, one sees a small space that is lit by lampas, glass and metal  held candles hanging from the ceiling. It looks like a sky full of stars. Which is a motif that I found again and again in the Church of the Nativity. Stars in stone and metal everywhere I turned. 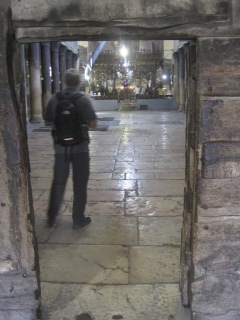 There’s an altar under that candle-star ceiling. It is built over a cave which is the place that may very well be the actual place that Jesus was born. Certainly the little town of Bethlehem was full of citizens the night of Jesus’ birth, and all of the guest rooms were empty. Bethlehem is full of caves, and the tradition is that animals were housed in those caves, and it was in one of those caves where Joseph and Mary found shelter.
To get to the actual place of Jesus’ birth, one has to walk down stairs and through yet another door to the small chapel built in one of those caves under the altar. In that chapel is yet another altar, and under that altar is a large fourteen-pointed silver star. In the middle of the star is a hole, and if one bends way down, and touches the center of the star, one can actually touch, with thousands of tourists and pilgrims before us, and thousands more to follow, the stone on which Jesus was born. 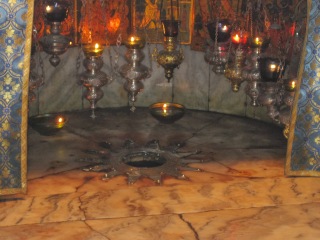 I’ll admit that I was pretty cynical during my three week travels in the Holy Land about the veracity of some of the places set aside as sites where this or that happened in Jesus’ life. But I couldn’t help myself—I walked down those stars and into the cave that is now a chapel. I stood at that altar, and then knelt low, and when I placed my hand on the rock in the center of that Bethlehem star, I felt transformed and filled with light.
What a surprise.  I was a believer.
As God would have it, unlike every other Jesus-place that I’d visited in the Holy Land, there was no crowd.  In fact, the church was pretty much empty except for the clergy and women religious and a few stray guests.  Like me. I was able to stay for what felt like a long time bent low in that place where so many other pilgrims had prayed before me.  I prayed for my parish family at St. Mary’s, and I could hardly wait to come back and tell them all about it. I’ve been holding this story in my heart to share with them this Christmas for over a year.
+ 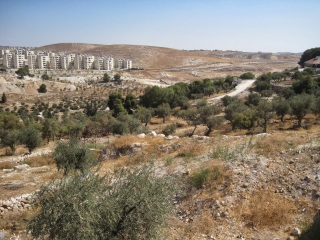 The night that Jesus was born, for me the central characters of the story are not Mary or Joseph or even baby Jesus. They are the shepherds out in the pastures surrounding Bethlehem watching their flocks of goats or sheep. Ordinary people doing ordinary things. Probably not expecting anything special that night, particularly from God. God chooses them to be the very first to know, outside the manger, that the Son of God was born, as a baby wrapped tightly in a receiving blanket right after birth, in the place where the animals were kept safe.
What does the angel of the Lord say to them?
To you is born this day in the city of David [Bethlehem] a Savior, who is the Messiah, the Lord.
Who were Jesus’ parents?  Mary and Joseph. But the angel does not say Mary and Joseph’s child is born this day—but your child. The shepherds and all of ours who hear the angel’s message. Jesus was not only born into his birth family. Jesus was born into each of our lives and hearts. The angel says so!
Do you know what the word Bethlehem means? House of Bread.
Not many of us get to travel the long road to Bethlehem in Palestine. But week after week we come to a House of Bread at St. Mary’s. It has an altar, and it is the place where our gifts of bread and wine are offered and blessed, and given back to each of us. When we cup our hands to receive the bread, it looks like a little manger. Every time that bread is placed in our manger—hands, Jesus is born again for us. Every time we take that baby Jesus bread and put in our mouths, and eat it, and swallow it, Jesus is born again in our hearts.
+

On one of the doors in the Church of the Nativity in Bethlehem is a sign: 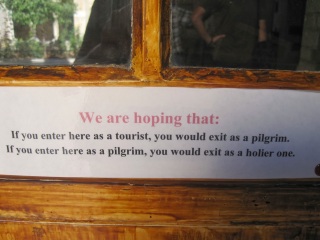 We are hoping that if you enter here as a tourist, you would exit as a pilgrim.
If you enter as a pilgrim, you would exit as a holier one.
Our prayer for all of us who gather tonight in this Bethlehem, this House of Bread is that if we have come as a tourist, showing up because it’s a place to visit, that we will exit as a pilgrim. Someone seeking the truth of Jesus who was born in a cave 2000 years ago.
For those of us who entered as pilgrims, may the mangers of hearts be filled with the True Bread, the Love of God, and may we be transformed once again into the star-filled Light of Christ.   AMEN 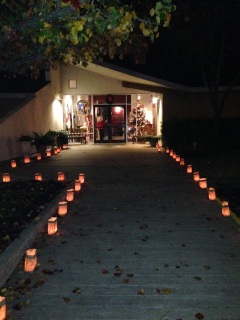 2 thoughts on “Oh little town of Bethlehem: A Christmas Sermon for St. Mary’s”