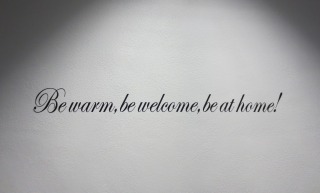 Women Touched by Grace is an Eli Lilly Sustaining Pastoral Excellence Grant for women clergy.  I was blessed to be part of the first WTBG group which gathered seven times between 2003 and 2006.  As a result of my relationship with the (Benedictine) sisters of Our Lady of Grace Monastery (with whom we shared worship, prayer, and play), I became an oblate of the monastery which has brought me back to monastery at least once every year. The bonus has been that I have been asked to return to facilitate Women Touched by Grace sessions for the second, and now the third group.

I was scheduled to leave Houston early yesterday morning, but when I got to the airport they were looking for volunteers to fly out on the afternoon flight (the flight to Indy the night before had been cancelled, and there were a slew of people yearning to get home).  It was one of those rare times when I could actually take a later flight–so for waiting, I got a $500 travel voucher, a first class ticket on the 1 PM flight, and a morning in the first class lounge.

My seat mate on the flight was a young mom who was holding her one year old daughter, just three months older than my grandson Jonas. It made for a bit of adventure, but how nice to be able to be a flight grandma for a couple of hours.

So now I’m at the monastery.   Lilacs are blooming.  I have a lovely small room in the guest quarters.  I’ve walked the labyrinth, prayed the morning office with the sisters, and already had holy rest.

At Morning Praise this morning, the acolyte read from St. Julian of Norwich:
I saw no kind of vengeance in God,
not for a short time
nor for long–
for as I see it,
if God were vengeful
even for a brief moment
we would never have life, place or being.
In God is endless friendship,
space, life and being. 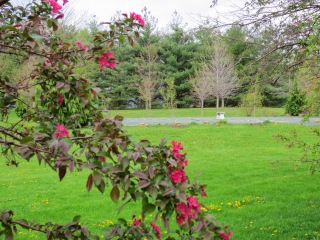