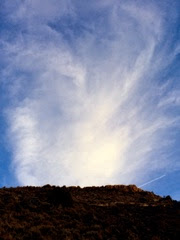 My traveling friend has been fighting a cold, and had been quite a trooper.  We’d been waiting for her to feel well enough to hike and yesterday was the day.

There are many amazing hikes along the Rio Grande Gorge, and the one she’d wanted us to do for two years was La Vista Verde Trail. It’s a two and one half mile round trip trek that takes you back and forth along the Gorge.
As is our custom, we began our day as our pokey selves. We started the day with morning devotions and quiet, cinnamon toast before a fire, and Advent card making. Then of course we needed to eat lunch before our hike (yet another plate of blue corn cheese enchiladas). Since we were on the north side of town, there was a gallery to pop in where a friend was showing her work, followed by a couple of quick errands to run. 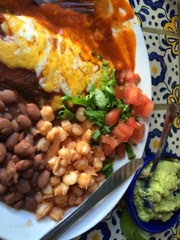 Darting and lunging and detouring on our pilgrimage way, our arrival after the thirty or so mile drive to the trailhead was not until almost three in the afternoon. This put the day perilously near the early sunset, but we set out with confidence.
We were almost immediately welcomed on the trail with a trinity of big horn sheep   who seemed content to allow us to walk beside them within touching distance. 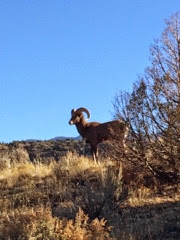 We were the only travelers on the trail. It’s a point of trust when walking in a place never walked before with limited signage. The trail seemed to go away from the Gorge rather than closer, so we had to watch the path with care. Footprints from other hikers were always welcome.
After about forty five minutes we arrived at the edge of the Gorge where we were greeted with not one but two benches for rest. After praying the afternoon office, we realized it was nearly four, and the sun had moved behind the mountains. Though we had nearly an hour of light left, the air was beginning to chill. It was time to return. 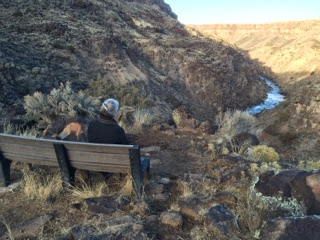 Knowing we’d been a bit foolish with beginning the hike so late, I was mindful that we were in the middle of nowhere with only sweaters to keep us warm, some water, and phones without service.
Poorly planned as we’d been, I’d been praying and meditating this week with St. Brendan the Navigator who’d journey with God and a few monks; they had sailed without a map in a coracle for seven years. Somehow I felt safe.
Which I was–or covered in grace, I should say, despite my lack of thoughtful planning.  The vesper light drive home took our breath away. 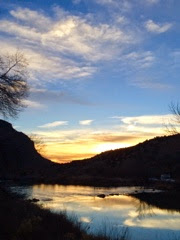 Safely back to Taos, we enjoyed our annual tradition of cappacinnos at the Taos Inn, then home for soup before yet another fire, and Advent stockings, our annual gift exchange. 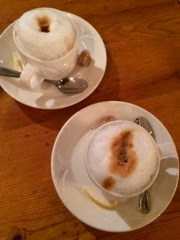