For many years there was a woman who is very dear to me who suffered from depression.   When asked, she said that her depression felt like she had no purpose and no hope. Too many times, her sadness so overcame her that she took to her bed.

The woman has never been particularly fond of travel, so nearly thirty years ago when her church planned a trip to go to the Holy Land, she was not particularly interested.  But her husband wanted to go, and they loved their pastor who was leading the pilgrimage, and so, somehow, she found the courage to make the trip.

The story from her travels that touched me most was the one of her visit to a road just south of the old city in Jerusalem.   Worn stone steps climb a hill, and though historians cannot agree exactly where the High Priest’s house or the Upper Room were, almost all believe this road was used in Jesus’ time. In fact, most concur that this is the road that Jesus and his disciples would have walked from his last meal with his disciples to the Garden of Gethsemane.  It’s the same road that he would have walked after his arrest by the Roman soldiers back into Jerusalem to the High Priest’s house where his trial began. 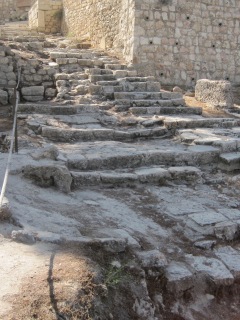 This woman who is dear to me told me that this road wasn’t on their planned itinerary, but that somehow they ended up there. When she got to the ancient road, she was overcome by the presence of Christ, and was unable to put her feet upon on it.

It was holy ground.  It was one of those thin places where heaven and earth meet.

The woman walked up the hill on a path beside the steps, mindful as she walked that she was walking beside the place that Jesus himself walked.  Where his very footsteps had been. On the way to the cross.

In that thin place, something shifted in this dear woman, although she didn’t know right away.  When she got home, after years of suffering, really suffering from depression, a doctor finally listened to her.  He acknowledged the deep emotional pain that she had carried within her.  He prescribed some medication that began to help.

In her sixties, this woman began to be the woman that God had created her to be in a way that she never had before.  She was transformed.  Beside that road that Jesus walked the week we call holy, she had received what I consider a miracle of healing.

When I went to Jerusalem a year ago, this was a place that was on my must see list. It’s roped off now, and one cannot walk on it.  But it is still a thin place. And I could stand beside it and see Jesus walking up and down those steps.

I could see on this very road ….. When they had sung the hymn, they went out to the Mount of Olives (Matthew 26.30).  Jesus’s disciples walking with him.

I could see, later that night, on that same road, Those who had arrested Jesus took him to Caiaphas the high priest (Matthew 26. 57).  His disciples having deserted him, he walked this time without a friend.

I could see this woman, so dear to my heart, walking prayerfully up the hill, with her broken spirit being made new by Christ’s healing grace.

This week, of all of the weeks of our Church year, is a place where heaven especially meets earth. We are all invited to walk on ancient and holy roads with Christ.  Roads of prayer and scripture and worship.  Roads of spiritual practices. 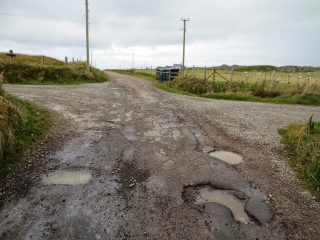 I wonder.  Would this woman have been healed in such a remarkable way if she had not made her pilgrimage?  God only knows.

I wonder.  What will happen to us when we walk this Holy Week with Christ, and with our parish community?  God only knows.

When the dear woman traveled to the Holy Land, to this road, I believe she had no expectation of healing or transformation.  But she showed up.  And God did an extraordinary thing.

When we show up on this the Holy Road of Holy Week, what extraordinary gift of healing and forgiveness does God have planned for us?