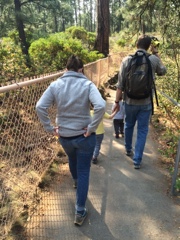 The gift of having my son and his wife both able to take some time off from work today!

We started with a feast of Sue’s eggs and chocolate chip coconut scones followed by the bonus of FaceTime with my NYC daughter. The family together!
Then we were off for for a ten minute drive to Newberry National Forest to hike the Lava River Cave, a lava-formed cave that’s a two mile hike in and out; down 150 steps, and over a combination of flattish sandy path, uneven rocks, and stairs. Pitch black and 42 degrees cold!
I do like to hike, but this trip I came prepared for summer and neighborhood strolls. No hiking stick, no proper footwear, and certainly no cold weather garments.  Remembering that pilgrimage is about surrender with joy, particularly to the unexpected, I was willing to go. What was at hand would have to be enough.
Which is where the prayer walking began.  Being underground is not my favorite place to be. It’s unsettling to be beneath the earth. After prayers for safety for the five us, prayers for peace and, yes, courage for me were next. We did have a two and five year old with us!  With flashlight in one hand to light our path, and a five year old hand in the other, the adventure began.
I could not let my attention wander. Slippery spots and holes abounded, and I had a precious traveling companion. As I walked, I was reminded again and again and again that this was very truly mindful walking.  No moments to take photos during this mindful hike.
Half way in, Austin realized he needed to go to the bathroom, so the trip back to earth was a most mindful hurry. I only fell once. 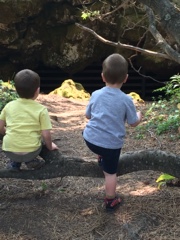 Outside we enjoyed the sun and snacks and chipmunks frolicking all around. Austin and Jonas learned that if they were very still, the chipmunks would come near.
I’ve had such a good visit with my dear family. It’s taco Tuesday, and it’s cooled off some, and so it’s dinner outdoors for the third night in a row. There are chocolate chip cookies still to bake and one more morning to play.
It so very enough. 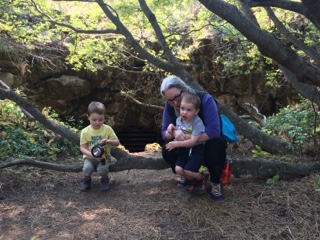