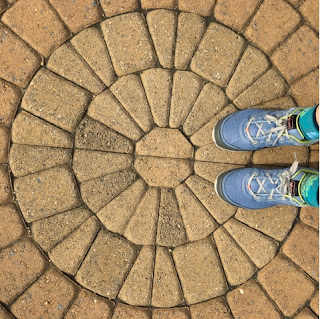 One of my favorite things to do on vacation is to find and walk labyrinths.  There is a great website that helps you locate labyrinths near you.  I’m still hoping that one day (soon!) we’ll build a labyrinth at St. Mary’s, and I’m always curious about how communities create labyrinths–there is a world of materials and designs.

On my trip to North Carolina, I found five labyrinths to walk in two days: 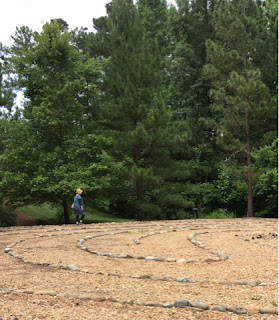 Each labyrinth had it’s own gift of prayer, but the one at Calvary was added as a recipient of the 24 Project,  the 24@ $100 giving mission I began in January in response to twenty four years of priesthood. The project will be coming to a close later this month in anticipation of my next project in celebration of twenty five years of ordination to the [transitional] diaconate.

Calvary Methodist is one of those precious churches that seems to have fallen on harder financial times and is faithfully seeking its mission amidst change.  Their labyrinth was in the basement of what appeared to be the parish hall.  It had been created in the floor itself by linoleum square tiles placed in a rectangular pattern in the Chartres design.  (I wondered:  Why didn’t we do that at St. Mary’s when we replaced the tiles in our upstairs gathering space?).  What I loved about the labyrinth was all of the events that happened on top of the labyrinth–with most folks, I imagined, not even knowing about the prayer foundation upon which they stood. 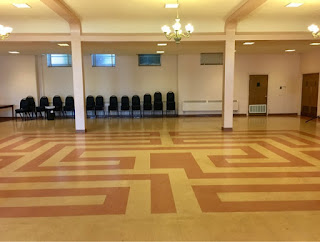 When I had called about walking the labyrinth, the administrative assistant told me that there were chairs arranged on it, and the room was set up for food distribution and medical and social services that afternoon. Could I wait until after that event, and their volunteers would move the chairs so that I could walk the labyrinth?  How many layers of ministry can you count here?
But there was more:  When I went to do my prayer walk the next day, the administrator told me that on Sunday afternoon that space was used for two different worshipping communities.  What holy stewardship!
So I gave $100 from the 24 Project to this faith-filled community–followers of Christ who have taken what they have been given as abundance and used it to cast wide a net of God’s love.   The labyrinth at Calvary United Methodist may not be the very most beautiful by outward appearances, but it is definitely one of the very most exquisite by God’s reflection through it. 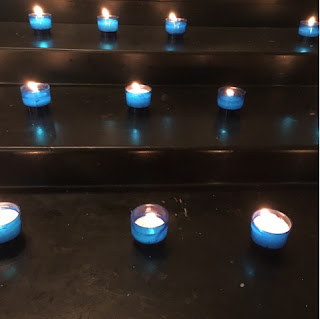 One thought on “The Twenty Four Project: Labyrinth Walk”