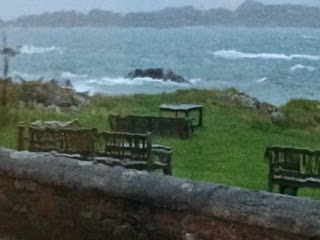 A hymn we sang at morning worship at the Abbey began, No wind at the window….Well, not really. Winds were 65 miles per hour in the night, and I awoke to the wettest, windiest day yet. Bicycles, a wheelbarrow, and leaves strewn, the paths were full of water. The photo above is blurry because of the rain through the window. Outside, my camera would have blown away!
When I walked out of worship, there it was: a patch of blue peeked from the grey, and the winds were gone. What a difference a stop for worship and prayer makes. 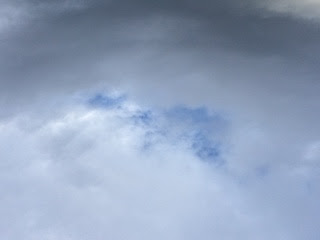 This second trip to Iona, I’m struck by the people I’ve met, and with whom I’ve had conversation, and how they have enriched my trip.
May, from Inverness, whom we met on the beach at St. Columbia Bay, and who was full of tales. She was on her own and needed companionahip. My friend walked the beach labyrinth with her.
Two men from Scotland met while walking. One man’s grandfather, an ordinary fellow, had brought George Carey to Christ. Yes, that George Carey, who would be Archbishop of Canterbury, an evangelist who would touch so many lives. There are no little acts for God.
Kathleen and her elderly mother traveling from Virginia, Episcopalians. The mother is quite a chatterer, and Kathleen was infinitely patient.  The mother’s many stops for conversation were a constant reminder of Christ in all persons. And reminded me to be patient, too. 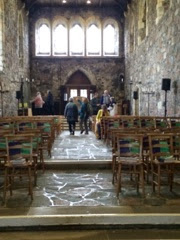 Lynne, a pastor from Canada, who amidst a conversation about the hymns in the Abbey, introduced me to a treasure trove of new music.
Gretchen, a priest on Sabbatical, who joined us for dinner last evening.
And so it goes.
So many prayers for traveling mercies especially in these storms.  God has given me a cozy chair, a warm, dry room, and a cappuccino. I have a friend with which to travel, and all is well. 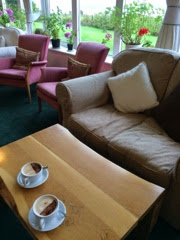