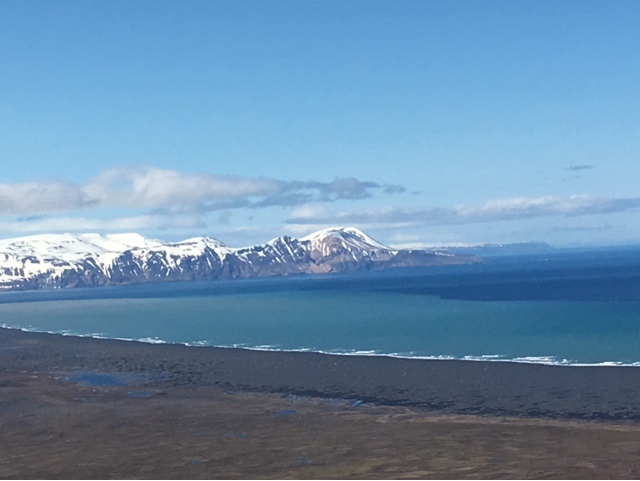 When I came to Iceland, one of the hoping to dos at the top of my list was to see puffins. I’d seen puffins once before in Maine years ago, riding out on a tour boat to see them diving and flying. On the drive back, I had stopped at an artist’s studio where a woman met with me to design and then create my white Corination stole. That stole has the memory of that day in Maine stitched into it.

Opportunities to see puffins, at least promoted as such, are everywhere in Iceland–from one that is an hour express excursion from the Reyjkavik marina to another which is a hayride out to a slippery slope.
The place I’d hoped to go, a good hike in a wildlife refuge, was closed because of nesting season. I’ve traveled enough with a desire to see wildlife that I know that animals and birds are on their own schedule and not mine, and so seeing them is always at best happenstance.
On Saturday night I was reading about things to do in the area, and I came across a blog that mentioned a promontory a two hour drive one fjord up where a flock of puffins lived. My friend and I were ready for another adventure. 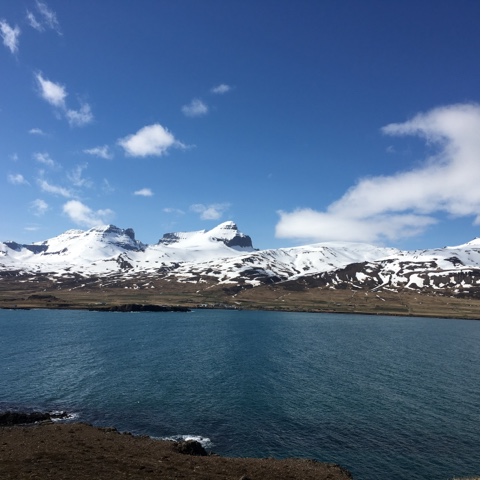 We were on the road right after breakfast. The sights along the way, at what felt like the top of the world, were the most spectacular yet in an already spectacular trip.
Borganes Estuary had clear signs pointing the way to the puffins’ home. As I walked  up the hill, I immediately saw a flock swimming in the water. Then I realized that the hill was dotted with holes where the puffins lived, and one after one after one, they popped their heads out and emerged, as if to pose for delighted humans. 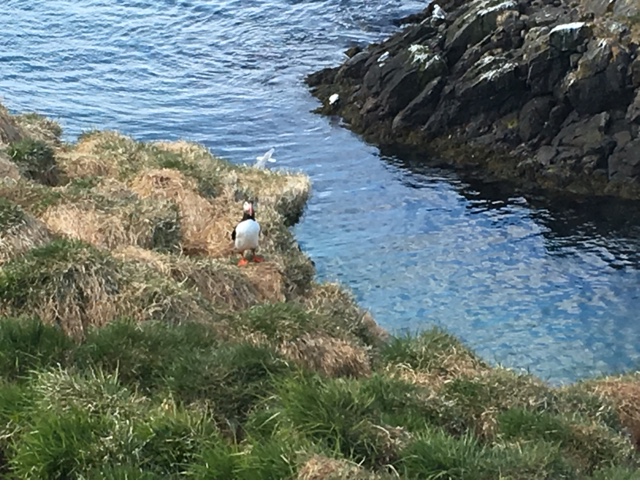 The best part of my visit with the puffins was sitting in the car eating my picnic lunch. Dozens of puffins literally whizzed by my window on their way from their homes on high to fishing for their lunch in the sea.
I was reminded of a book I read my children and now my grandchildren by Marie Hall Ets, Play with Me. It’s about a little girl who wants to play with the animals in the woods but they all dart away when she tries to run up and join them. Only when she sits still and quiet and waits for them do all of the animals come up to be with her.
My car was like a bird blind, and the puffins felt safe coming right by me. It was amazing.  Still and quietish and waiting was all it took.
Experiencing those puffins fly right by me was like being quiet and still and waiting in prayer, and then when least expecting it, receiving an answer beyond my most joyful imagining.
Whoosh! There goes another puffin! 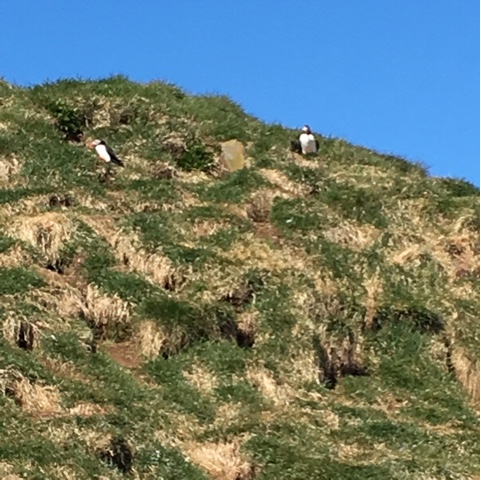